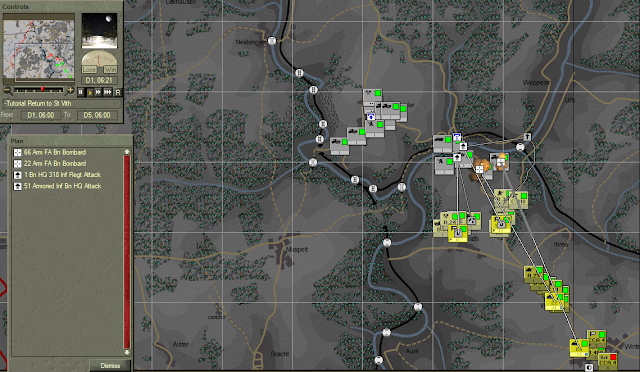 Steinebruck needs to come first. If I have any hope of breaking into the German backfield with my Combat Command of Stuart and Sherman tanks, I need to take Steinebruck. Without Steinebruck, there will be no St. Vith. Two field artillery battalions are attached to the US 4th Armored Division’s CCA, and I am not going to let them go to waste. CCA commander, General Earnest, back at HQ orders a 75 minute preparatory bombardment of Steinebruck. He pities the civilians left inside the village, but he needs the bridge there. Three kilometers away from the German frontline, 18 105mm howitzers from the 22nd fire at once, shells shrieking over battalions of waiting US infantry. Within minutes a second artillery battalion, the 66th’s guns, have joined them. Minutes stretch, as cigarettes are passed among the men of the 51st Armored Infantry Battalion and the 1st Battalion of the 318th Infantry Regiment. The snow covered ground, crunches underfoot as men shuffle back and forth waiting. The cre
Post a Comment
Read more

I am learning the ropes for a game I think is highly under-rated, and largely forgotten by digital wargamers:   Piercing Fortress Europa . Below is an AAR covering my recent play of the Italian campaign, during the winter of 1944. Situation January 2, 1944: The Allied Left: The Oak Tree Division and the US 36th Infantry (Texas Division) swing into action against the German right flank. The attack fails, despite having nearly a 2 to 1 advantage in troops. The Liri and Garigliano rivers coupled with mountainous terrain and a prepared, German defensive line of fortifications, the “Gustav Line,” are enough to turn the attack back. Six days later : A new attack is forming on the left. The British 5th infantry, part of the British X Corps, attacks against the same portion of the line the 46th failed on. Twenty four kilometers east of them, the French 3rd Infantry Division, a mountain unit, is attacking Cassino and twenty four kilometers east of the French, the US 45th Infantry division als
4 comments
Read more

September 12, 1942, just before sunset: [Historical scenario] Japanese Major General Kiyotake Kawaguchi has come to Guadalcanal to lead the attack against the Marine foothold on the island at Henderson Airfield. The I and III battalions of the 124th Infantry regiment are to attack from the south, along with the Kuma Battalion, II battalion of the 4th infantry regiment 19th engineer battalion. Kawaguchi will personally lead these battalions. A composite of Japanese engineers, special naval landing troops and the Oka Force, II Bn 124 Inf Rgt are to attack from the West. The Japanese objectives are the Marine bridge over the Lunga, the air traffic control tower on Pagoda Hill, the main runway hangars, and the Fighter One airstrip. Kawaguchi has grossly underestimated the strength of the Marine force facing him. The Marines have also disrupted his supply base along the coast at Tasimboko, dispersing a small reserve force, his artillery, and supplies. Special Terrain rules: The Lunga River
5 comments
Read more 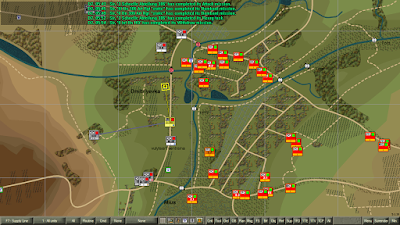 “ Crossing the Mius ” is a historical scenario. Date: 17 July, 1943 Location: Mius River Area, 30km North of Rostov Scenario Briefing: A few days after the opening of the German attack on Kursk the Soviets began preparation to attack the heavily fortified German "Mius Line". At Dmitriyevka, the 581st Infantry Regiment is dug-in and awaiting the Soviet advance. Across the river, the 31st Guards Rifle Corps is staging for an attack. Leading the way will be the 13th Guards Mechanized brigade and the 40th Guards Rifle division. Over 70 artillery guns have been assigned to the sector to open a hole up in the German defenses. This scenario can be played as either side. Sector Notes: Soviet air cover has a 4 to 1 advantage. German and Soviet reinforcements are available. Those moving to the front at night are more likely to arrive intact, those moving during the day are subject to nearly constant air attacks. Soviet land forces have more than a 2:1 advantage along the front
2 comments
Read more

28 days after landing in North Africa, the American 1st Armored division, 1st, and 2nd Bns, 6th Infantry Regiment found themselves dug in at the Tebourba Gap listening to the approaching tank treads of the German 10th Panzer division.  The following is an after-action report from this engagement: At 8 AM, on Djebel el Guessa B and C company send patrols out ahead of their positions. Visibility is down to 5 kilometers.  A company has already spotted a mixed force of German Fallschirmjagers and infantry are spotted west of El Bathan, but the worry is that they are trying to flank the battalion positions. 27th Armored Field Artillery battalion begins to shell them with their 105mm guns from six kilometers away as A company spots them on the flat. By 10:00 AM a 7-kilometer wide frontal attack is developing along the ridge.  Three German armored companies have joined them. 42 M3 Lees and M3A1 Stuarts of the 1st and 2nd battalions of the 13th armored regiment careen across the desert to hi
2 comments
Read more

This is the first of my Salerno scenarios. My design focus was a manageable unit count for both sides and a smaller map with more detail. To play you will need my Altavilla map, my Eastern Front Estab file, and the scenario file “Forsyth’s Fight.” I hope you enjoy it. DOWNLOAD THE SCENARIO, ESTAB FILE, MAP ON STEAM HERE DOWNLOAD THE SCENARIO AND ESTAB FILE FROM DROPBOX HERE DOWNLOAD THE ESTAB FILE IMAGES FOLDER FROM HERE Operation Avalanche: Sep 12, 1943 04:00Hrs Historical Background : Having consolidated the bridgehead around Paestum, and the high ground of Mt. Soprano, Maj Gen Dawley VI Corps Commander ordered Maj Gen Walker's 36th Lonestar Division to expand the bridgehead to the east towards the hilltop villages of Albanella and Altavilla. In the ensuing battle, Walker was to commit four of his seven available battalions as the struggle for Altavilla intensified. The key to the region wasn't the village - it was Hill 424 above it - and the Germans were well aware of its
Post a Comment
Read more

Historical Scenario: 11:00 Hrs, Sept. 11, 1943 The 179th Regimental Combat Team of the 45th US 'Thunderbird' infantry division is pushing for the vital Ponte Sele bridge, 7kms from the American beachhead at Paestum. Seizing the bridge will prevent the Germans from reinforcing the units opposing the American sector of the landings. German strength in the area is unknown. Col Hutchins of the 179th RCT makes the decision to bypass the German forces at Persano and push on for the bridge. A few hours later 179 RCT finds itself cutoff as German counterattacks to their rear and front intensify. The strong counterattacks sever the 2nd Bn, 179 RCT from the main body of the RCT, and trap the remainder of the regiment midway between Ponte Sele and Persano. To make matters worse for the Thunderbirds, the parallel force on the northern side of the Sele River, the 157th RCT, find themselves exposed to heavy artillery fire and blocked from the vital Sele river bridge that was to link the 17
Post a Comment
Read more
More posts