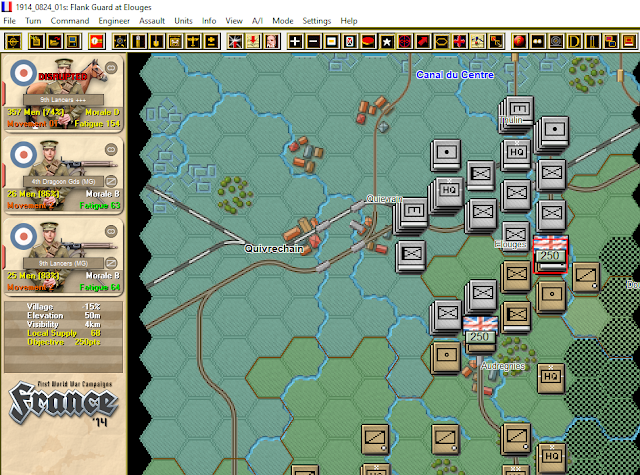 I recently purchased France ‘14 from John Tiller Software. Unlike WW2, the AMRW or the ACW I know practically nothing about WWI other than what I might have seen in movies like War Horse and 1917. I have been expecting incredibly high casualty rates as I play my way through short, small scenarios like “Flank Guard at Elouges,” and so far the game has lived up to my expectations.

This short, 4 turn scenario was a fearful slaughter.

Elouges, Belgium, 16km west of Mons, 24th August 1914: On the 23rd of August, during the first day of the clash at Mons, the BEF scored what could be called a tactical victory. The BEF had been bloodied but had denied the Germans a real foothold on the south of the Canal du Centre. On the following day, the Germans resumed their advance and the BEF began a fighting withdrawal to the south. It was during this second day that more desperate fighting occurred, in which Smith-Dorrien's II Corps suffered at the hands of the Germans. This suffering was due primarily to the fact that the BEF's commander, Sir John French, left too much room for error in his issuance of the withdrawal orders on the night of the 23rd. French told his Corps commanders to "work out the order of withdrawal amongst themselves" and, to make matters worse, Smith-Dorrien did not receive his orders until late morning on the 24th. Had French specified a specific guideline for the withdrawal and issued it earlier, the BEF withdrawal to the south would have been a simple, unmolested move during the night. However, the harsh reality was that Smith-Dorrien's II Corps was to be left hanging dangerously exposed and fighting a desperate flank guarding action at Elouges and Audregnies against von Klucks unrelenting advance. Smith-Dorrien quickly ordered his last remaining reserves, part of two of Allenby's cavalry brigades and two infantry battalions, the Norfolks and the Cheshire. They would fight gallantly against some twenty-four German battalions and hold the flank long enough for the remainder of the BEF to disengage.

On paper, so to speak, this sounds like a real German opportunity to bloody the British and open a hole in their lines.

In hindsight, the German AI commander who ordered this assault was a butcher. With German soldiers ordered up 50 meters of elevation change, in clear weather, against a seven-kilometer line of well-sighted British machine guns. The objectives of the attack the sleepy villages of Audregnies and Elouges always out of reach.

Turn 1: I am playing as the BEF force. The cavalry units at the bottom are fixed and mostly don’t come into play. The impassable hexes on the British right prevent a flanking movement. I did move a Lancers unit into the 1-kilometer wide gap to the right of Elouges this turn.

Casualties for the first two hours. Roughly six German soldiers are dying every minute along this 4-kilometer wide frontal attack.

The tactical situation hasn’t changed over the first four hours. The AI German army commander is still feeding his troops up the hill into my machine guns, and my well-sighted artillery. I am dropping shells on the advancing Germans and ignoring the buildup behind them. The German force is now losing nearly nine German soldiers per minute over the length of the attack (4 hours) and 11 per minute over the last two hours.

Turn 3 (Six hours): The German commander has widened the attack (from 4km to 7km) looking for an opportunity to punch a hole in my line or flank my men at Audregnies and Elouges. Even more German battalions are fed into the attack bringing the total up to 19. But these battalions are beginning to break under the murderous fire.

Over the six-hour attack casualty rates are averaging nine dead German soldiers per minute. Along my line, my men are running out of ammo and beginning to disorder but they are killing the attacking Germans at a 6:1 rate compared to their own dead. What seems remarkable to me, is that there is no physical British defense to speak of. No trenches, wire, etc. Just open ground and a downhill firing advantage in the PDT game files.

At the end of the final turn, the losses speak for themselves. Six German battalions have shattered and broken, fleeing to the rear as their attack stalls. My losses have been significant for an eight-hour battle but nowhere near the level of German losses. I did very little in terms of gameplay, but manage my artillery and move some cavalry units onto my flanks. I don’t really know what I might have done if the roles were reversed. I do think I would have waited to attack until I had massed these 4 counter stacks around Audregnies while softening up the British with my artillery on one fixed point of their defense.

My victory medal was a nice touch by JTS.

This was my first France ‘14 AAR. Compared to WW2 titles from John Tiller, every unit seems more effective at killing, which I guess reflects the poor tactics and poor mobility which from my limited understanding characterizes this period of warfare. 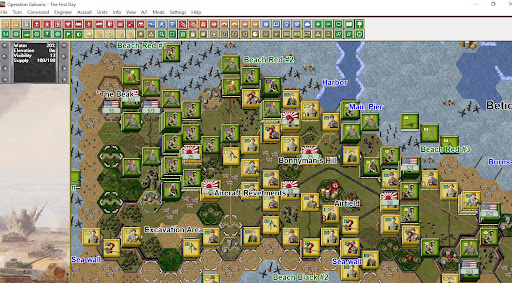 I have more games than ever but I want to play most of them less and less. As I approach my late 40s, I find myself wanting to absorb more detail from the games I play, but I have less time to wargame as my family life keeps me pretty busy. That lack of screen time has led me to choose better, ask more questions about titles I am interested in and say no to the voice in my head telling me to click the purchase button. I also find myself wanting to game more offline. I recently dusted off my ASL manual and bought the Pacific starter kit for that game, as well as Undaunted: Normandy from Osprey Games. These two titles added to my already alluring collection of Napoleonics, AMRW and WWII operational games and are making my tabletop more attractive than my laptop. That said, I had a pretty fun digital gaming year in 2019. I discovered probably my favorite game of the year Piercing Fortress Europa; I began to dabble in the Pacific theater of WWII with a Panzer Battles Tarawa scenario that…
Read more