German forces of the 6th Army have launched offensive operations against the Soviet held positions in Stalingrad's northern suburbs and the Dzerzhinsky Tractor Factory.

Given the hard fighting in the city center, the operations staff within 6th Army HQ believe the fall of the Tractor Factory can be achieved within a 9 day timetable, once adequate forces are brought to bear.

Intelligence believes Soviet resistance will cease within the City after the seizure of the Factory.

This scenario is meant to be played as the Germans.

The primary source for this scenario is Stalingrad 1942 by Peter Antill.  David Glantz's Gates of Stalingrad has also provided useful information about the German OOB, especially 16th Panzer.

You will need to use the Stalingrad North - Tractor Factory map as well as the updated Eastern Front Estab file.  The scenario is titled Sledgehammer.

Unit placements are approximations.  Feel free to alter positioning and force structure to play this scenario the way you want to.

I will likely make additional tweaks to this scenario so please stay tuned for further updates.

Jason Rimmer said…
Thanks very much!.

A few more of your amazing scenarios and players can have a near full game just using the demo!

Having bought several versions of the engine so far I'm sticking with the demo for abit. I'll buy the next East front title though.
August 29, 2015 at 6:42 PM

Anonymous said…
Thank you. I'm eager to try your scenario.

You are talking about "You will need to use the Stalingrad North - Tractor Factory map as well as the updated Eastern Front Estab file."

Where I could find those files please ?

Hope you enjoy it!

Unknown said…
Hi Chris,
beyond the above map and download, do I need any of the modules to play the scenario?

Look forward to trying it.

Unknown said…
Thank you for the excellent scenario!

Unknown said…
Thank you for this great scenario!
I love long scenarios
sinbad
December 15, 2015 at 10:43 AM

Anonymous said…
Hi,
but - in this scenario - there are no mortar platoon in axis infantry bns?
I'm not expert in TOE matters, but it seems to me a little bit strange. There is only divisional and regimental artillery?

Lately, I have been very interested in the fighting around Aachen and the Westwall campaign. Fortunately, Command Ops 2 has an entire module titled appropriately enough “Westwall” covering this period of the war along the German frontier. As the US VII corps advanced towards Germany in September of 1944, the Stolberg corridor was the likeliest approach from the southeast of Aachen towards the Westwall through a gap in the line of mountains and heavily forested terrain there. German intelligence knew this but had little in the way of reserves to reinforce the line ahead of the American advance. A small kampfgruppe from the 9th Panzer Division was formed along with the remnants of a Panzer brigade. The 12th Volksgrenadier division would be the follow-on force and their staggered arrival is represented accurately in the scenario reinforcement schedule. Given the defensive challenges facing the Germans, I have decided to play that side. This AAR contains the orders I issued as the G
Read more 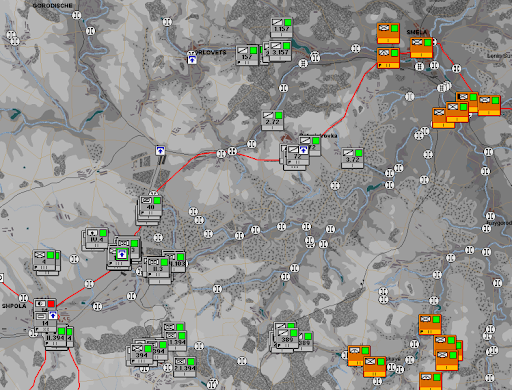 The  best Command Ops 2 scenario I ever played  was called “ Burning Metal .” It was designed by  Tim at Ranger X3X  and pitted the 1st SS Panzer Division against the US 2nd Armored Division. It was a straight-up fight in the Dutch countryside. Going into it I knew casualties were going to be high and the challenge was clear. It was also a fictional scenario that didn’t get weighed down by the historical straitjacket that wargame designers wear. “Unrein’s Fight” is my homage to “Burning Metal.” It pits the 14th Panzer Division v. 2 Soviet Corps (a tank and rifle corps). The Soviet player is on the attack and the German player is on defense. The historical context for Unrein’s Fight is this: Fictional scenario Jan 25, 1944: 2 days, 10 hours, 43 minutes, 197 units Background: On January 6, 1944 the Korsun salient was already an ongoing concern for German commanders.  Soviet offensives around Kiev and Kirovograd threatened to cutoff two German corps and German frontline comman
Read more